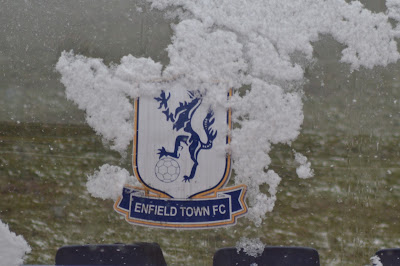 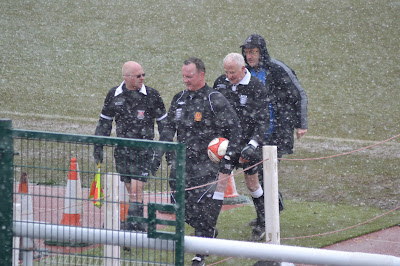 Ariving at The Queen Elizabeth II Stadium, even though it was bitterly cold the pitch looked a nice shade of green and the 2 teams were doing ther warm ups.
When the match kicked off the snow started coming down,first lightly and the really heavy,but both teams just got on and played through it.
Enfield Town scored with only 1 minute on the clock and with both teams having at least 6 chances each the next goal didn't come until the 28th minute and the score stayed 2-0 until half time.
Both teams started the second half at breakneck speed and Town went 3-0 up in the 52nd min only for Enfield FC to pull 2 goals back after 57 & 60 mins.
Any thought of Enfield pulling off a win went through the window as ther defence just fell apart and consceeded 5 more goals in the 63rd 79th 81st 89th & 90th minute to see Town move within 2 points of leaders Romford,but with 2 games in hand,and a goal difference of +20 greater.
Posted by Local Bus Driver at 22:25